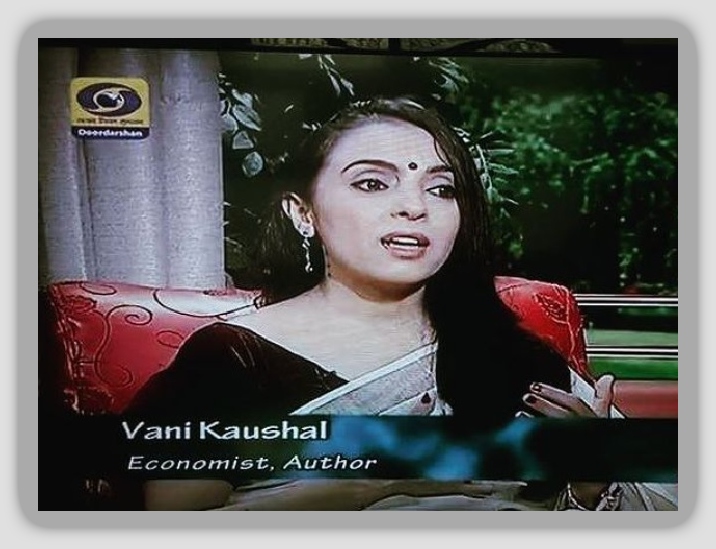 Vani Kaushal as seen in a televised interview on Doordarshan (Sept, 2016)

Vani was born in Garian, Libya in a traditional Hindu Punjabi family. Her parents prized ‘good’ education above all else, and when she was still small, they decided to move base to Chandigarh, a modern city in the North of India, famed for its educational institutions.

As a child, she loved reading, but writing stories of her own never really occurred to her, much like everything else. Becoming a doctor wasn’t an option, for the very sight of blood made her retch. Mathematics and Excel sheets bored her no end, leaving Humanities as a last resort. She could easily compete for the civil services, her parents reasoned, although, sitting for an exam with a million potential candidates vying for one job didn’t make much sense to her.

Fortunately, life took a better turn and it was a Masters degree in Economics alongside a programme in Mass Communications that set her foundation for a career in business journalism. Luckily, she got to work in some of the best organisations of India, like ‘The Times of India’ and ‘The Financial Express’.

In 2004, she was hit with the desire to write a novel. However, a few drafts and several ideas later, she gave it all up to pursue an MBA degree from Kingston University in London. Of course, she dreamt about MNC firms coveting her, the Deloittes and the McKinseys of the world chasing her down with multiple job offers, the likes of Accenture begging her to work for them. The reality was quite different, though.

The completion of her course coincided with the start of global recession and her dreams could never be realized. Her situation, nevertheless, prompted her to write her first full novel. It was released in 2015 to widespread acclaim with top class reviews in all the newspapers of India. She was even interviewed by the national broadcaster, Doordarshan.

Vani made a foray into non-fiction with her book, ‘Flowers Forever’ that was published in the United States by Los Angeles based World Wide Art Books. Her book got rave reviews and she was profiled by Hindustan Times, Open Magazine, Lifestyle Magazine, Quint and Daily Post.

Vani explores the other side of fame in her latest romantic thriller, ‘Seconds Later.’ The novel has been steadily climbing up the charts ever since its worldwide release with rave reviews in popular media. Vani has already been profiled by international media houses like Transcontinental Times, apart from The Tribune, Sunday Guardian, Dainik Bhaskar, Indian Express, Yugmarg and Doordarshan. Vani and her new book were recently profiled by noted celebrity and anchor, Cyrus Broacha on his popular show, Cyrus Says. She is currently working on a self-help book for women. She splits her time between reading and writing columns for platforms like Quint, Scroll and Open Magazine.