Home
About Vani and Her Books 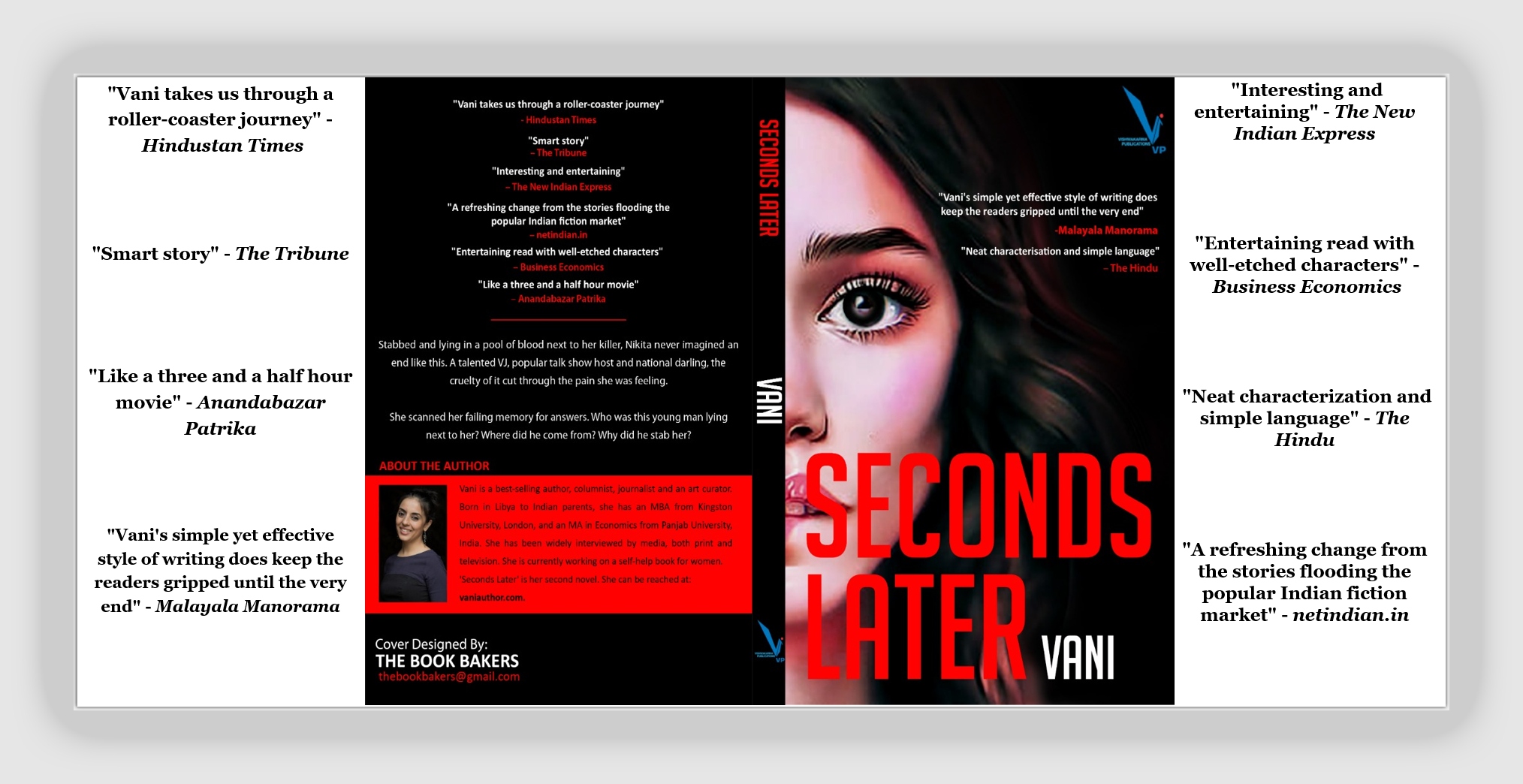 Stabbed and lying in a pool of blood next to her killer, Nikita never imagined an end like this. A talented VJ, popular talk show host and national darling, the cruelty of it cut through the pain she was feeling.

She scanned her failing memory for answers. Who was this young man lying next to her? Where did he come from? Why did he stab her?

Vani is an international author, journalist, columnist and an art curator. Born in Libya to Indian parents, she has an MBA degree from Kingston University in London and an MA in Economics from Panjab University in India. She took a plunge into the world of fiction writing after working as a business journalist for leading newspapers, The Times of India and The Financial Express. Vani explores the other side of fame in her latest romantic thriller, ‘Seconds Later.’ The novel has been steadily climbing up the charts ever since its worldwide release with rave reviews in popular media. Vani has already been profiled by international media houses like Transcontinental Times, apart from The Tribune, Sunday Guardian, Dainik Bhaskar, Indian Express, Yugmarg and Doordarshan. Vani and her new book were recently profiled by noted celebrity and anchor, Cyrus Broacha on his popular show, Cyrus Says.

Vani’s debut rom com, ‘The Recession Groom,’ was released in 2015 to widespread acclaim with top class reviews and interviews in all the major newspapers of India. Her novel also received praise from international readers. She was interviewed by the national broadcaster, Doordarshan, and by Kalinga TV. Her interviews were published in India Today, Hindustan Times, Times of India, DNA, Hindu, New Indian Express, Khaleej Times, Economic Times, Business Standard, Tribune, Indian Express, Dainik Bhaskar and SheThePeople.TV.

Vani made a foray into non-fiction with her book, ‘Flowers Forever’. It was published in the US by World Wide Art Books. Her book celebrated the four-decade artistic career of Elizabeth ‘Lizo’ Shahenian, an award-winning American Armenian artist. She is currently working on a self-help book for women. She splits her time between reading and writing columns for platforms like Quint, Scroll and Open Magazine.